I started discussing the coastline shapefile problem in first post.

Early on, I found the tool called QGIS Browser and installed it on my desktop. I used this to examine the shapefiles I was creating.

Here are screenshots of each one. 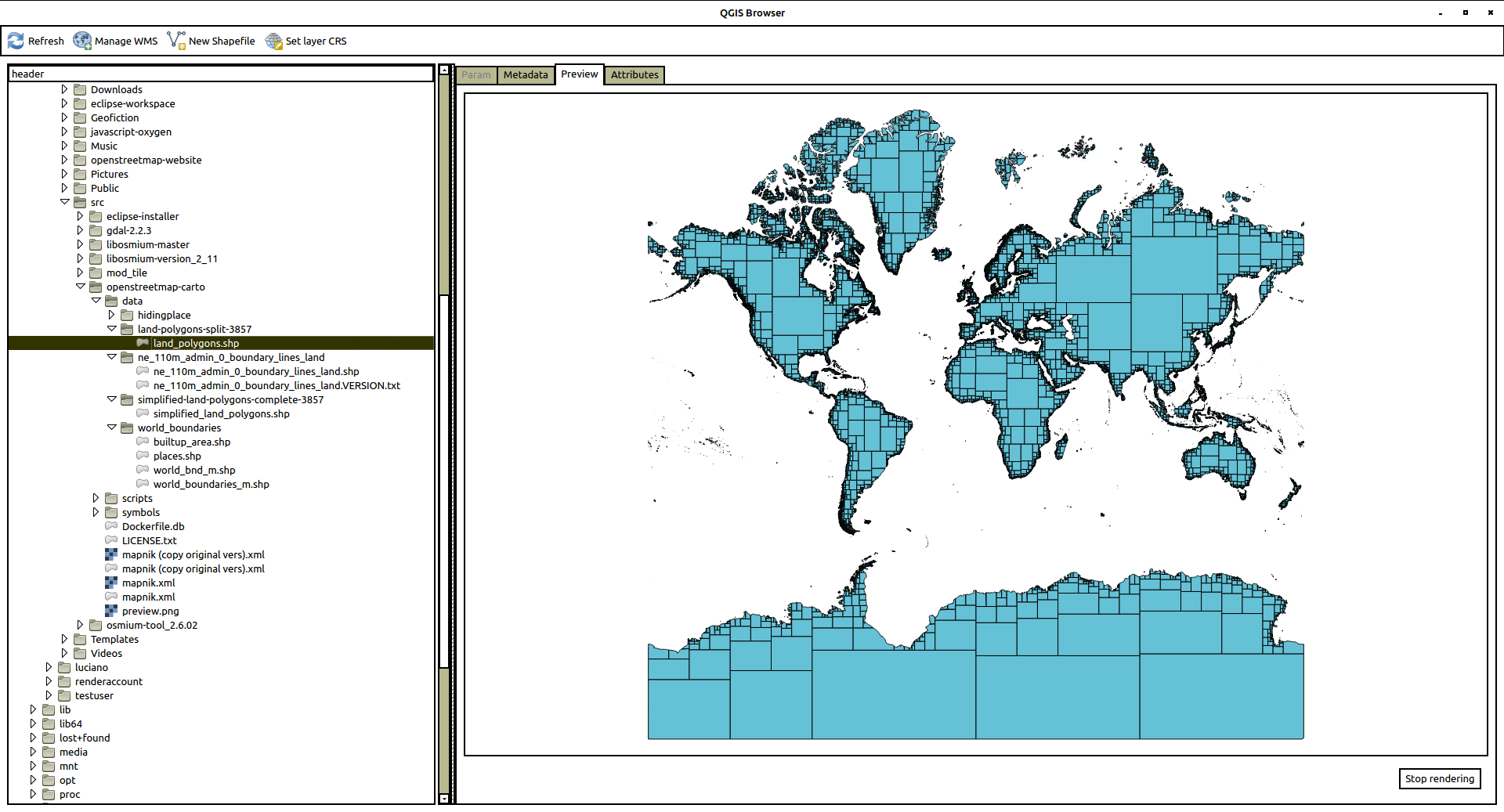 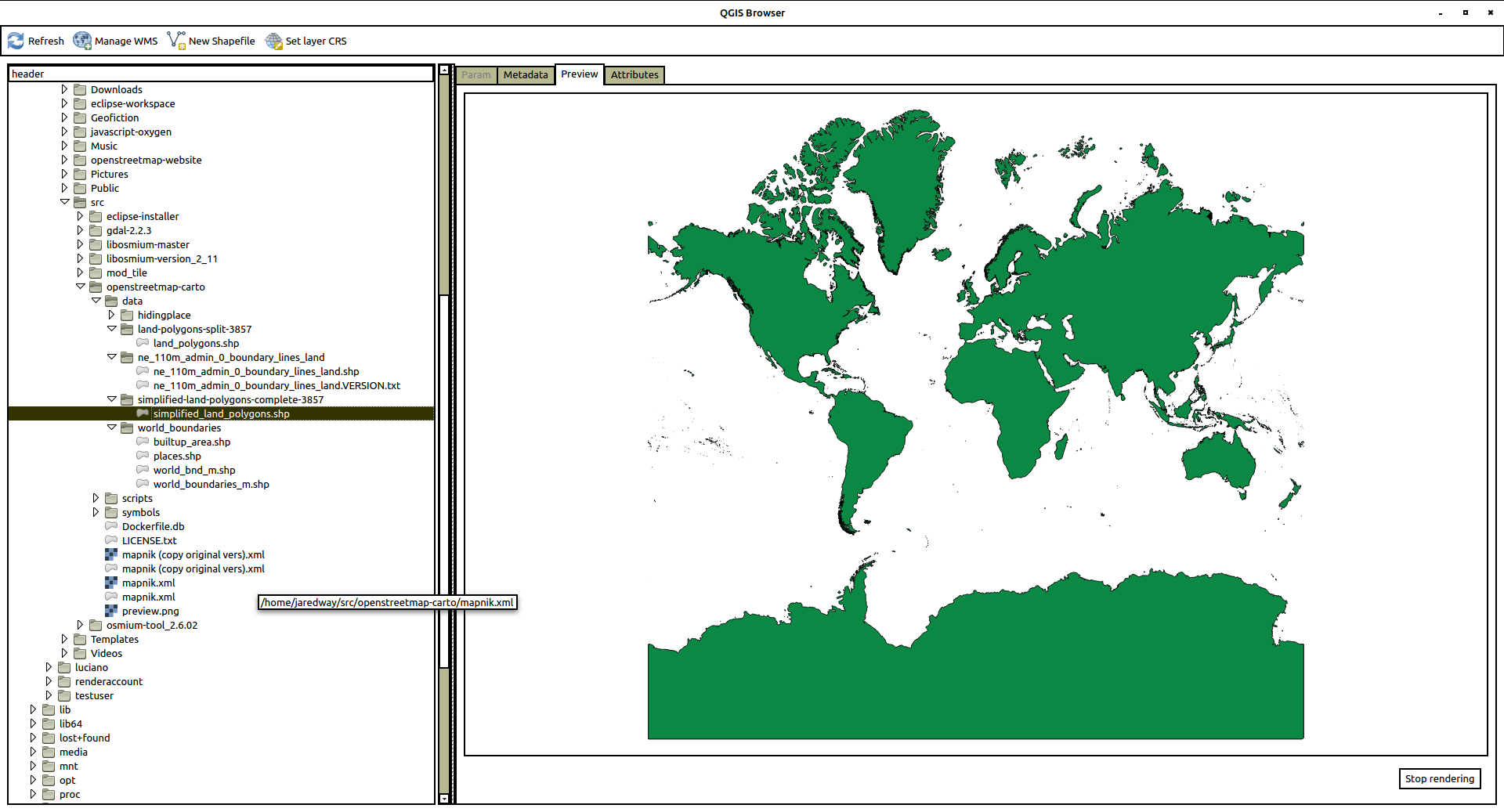 The structure is pretty straightforward, but – how do I make these? Where do they come from? – aside from the non-useful explanation found most places, which is that “OpenStreetMap generates them from the data”.

The way that the shapefiles are generated for OpenStreetMap are not well documented. But after looking around, I found a tool on github (a software code-sharing site) developed by one of the OpenStreetMap gods, Jochen Topf. It is called osmcoastline, which seemed to be the right way to proceed. I imagined (though I don’t actually know this) that this is what’s being used on the OpenStreetMap website to generate these shapefiles.

The first thing I had to do was get the osmcoastline tool working, which was not trivial, because apparently a lot of its components and prerequisites are not in their most up-to-date or compatible versions in the Ubuntu default repositories.

So for many of the most important parts, I needed to download each chunk of source code and compile them, one by one. Here is the detailed breakdown (in case someone is trying to find how to do this).

I followed the instructions on the github site (https://github.com/osmcode/osmcoastline), but had to compile my own version of things more than that site implied was necessary. Note that there are other prerequisites not listed below here, like git, which can be gotten via standard repositories, e.g. using apt-get on Ubuntu. What follows took about a day to figure out, with many false starts and incompatible installs, uninstalls, re-installs, as I figured out which things needed up-to-date versions and which could use the repository versions.

I have a directory called src on my user home directory on my server. So first I went there to do all this work.
cd ~/src

I got the most up-to-date version of libosmium (which did not require compile because it’s just a collections of headers):
git clone https://github.com/osmcode/libosmium.git

Then I had to install protozero (and the repository version seemed incompatible, so I had to go back, uninstall, and compile my own, like this):

I had to do the same for the osmium toolset:

That takes care of the prerequisites. Installing in the tool itself is the same process, though:

So now I had to try it out. Bear in mind that each command line below took several hours (even days!) of trial and error before I figured out what I was doing. So what you see looks simple, but it took me a long time to figure out. In each case, after making the shapefile, I would copy it over to my desktop and look at it, using the QGIS browser tool. This helped me get an in intuitive, visual feel of what it was I was creating, and helped me understand the processes better. I’ll put in screenshots of the resulting QGIS Browser shapefile preview.

To start out, I decided to use the OGF (OpenGeofiction) planet file. This was because the shapefiles were clearly being successfully generated on the site, but I didn’t have access to them – so it seemed the right level of challenge to try to replicate the process. It took me a few days to figure it out. Here’s what I found.

Here is a view of the .shp file in the QGIS Browser. Looks good. 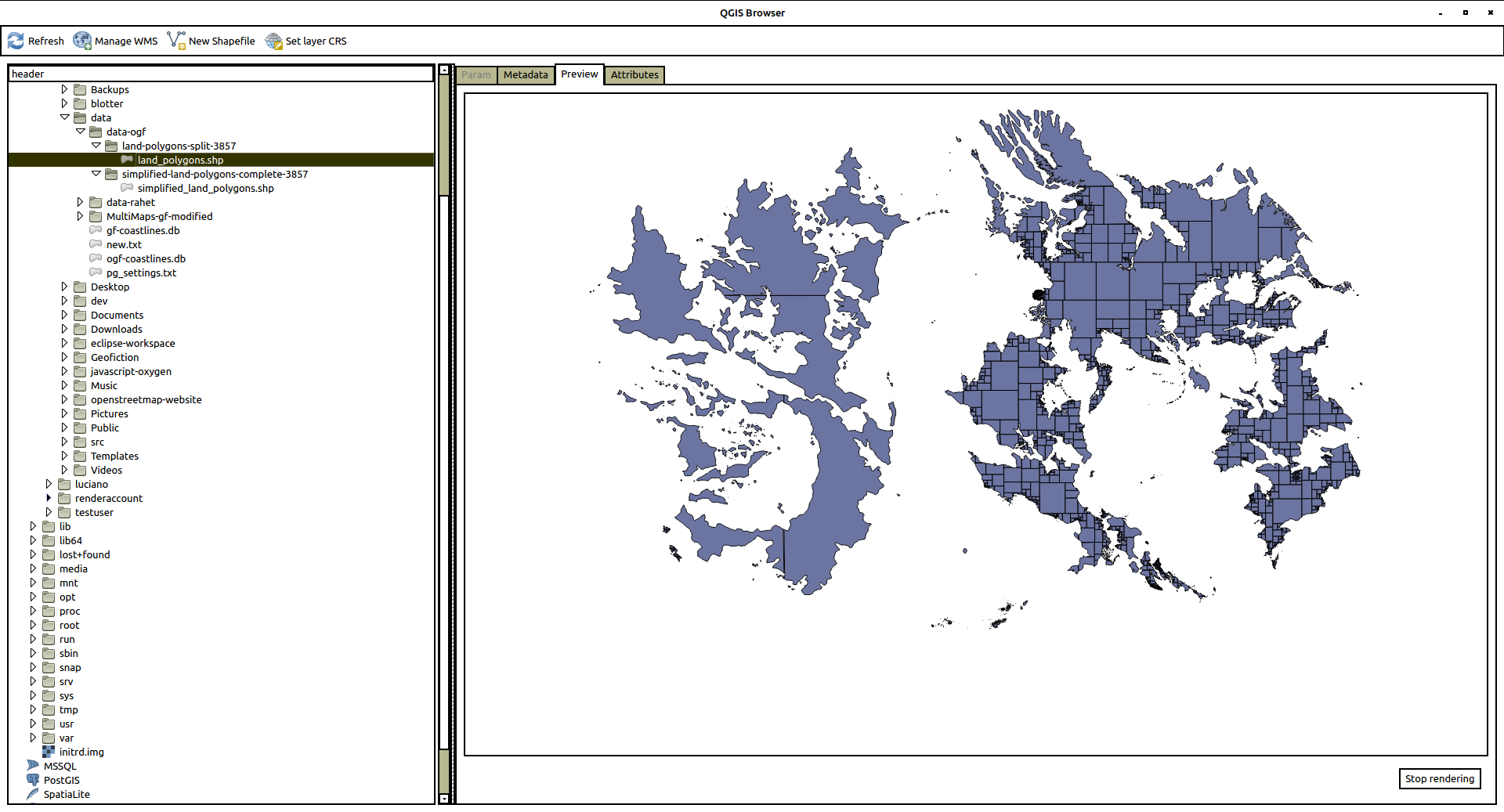 I copied these files into the /openstreetmap-carto/data/land-polygons-split-3857/ directory, and I tried to run renderd. This alone doesn’t show the expected “ghost” of the OGF continenents, though. Clearly the simplified_land_polygons.shp are also needed.

So now I experimented, and finally got something “simplified” by running the following command line invocation (note setting of –max-points=0, which apparently prevents the fractal-like subdivision of complex shapes – technically this is not really “simplified” but the end result seemed to satisfy the osm-carto requirements):
YOUR-PATH/src/osmcoastline/build/src/osmcoastline --verbose --srs=3857 --overwrite --output-lines --output-rings --max-points=0 --output-database "YOUR-PATH/data/ogf-coastlines-unsplit.db" "YOUR-PATH/data/ogf-planet.osm.pbf" 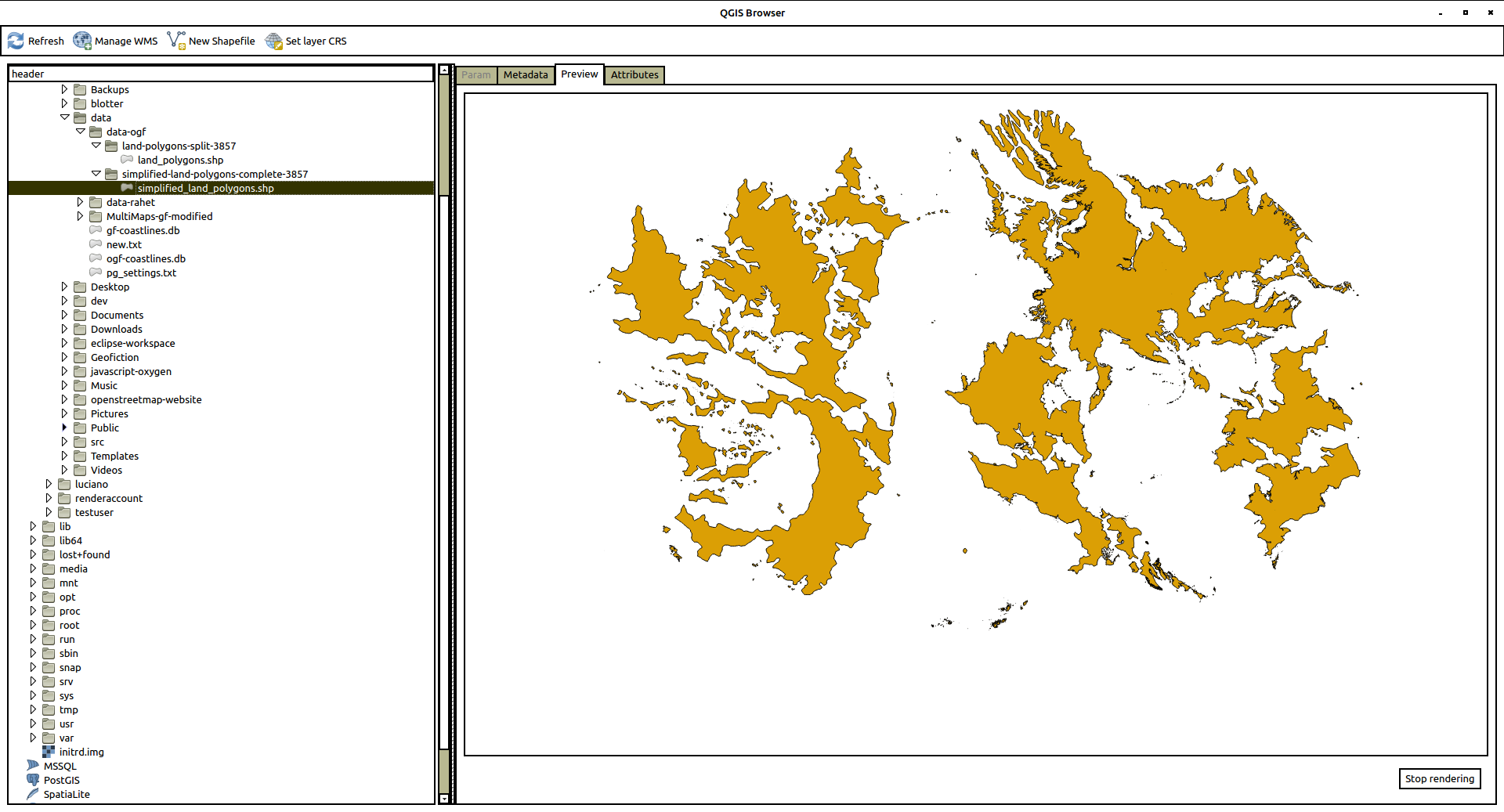 Now when I copied these files to the /openstreetmap-carto/data/simplified-land-polygons-complete-3857/ directory, and re-ran renderd, I got a successful ghosting of the continents in the render (no screenshot, sorry, I forgot to take one).

Using osmcoastline for my own data 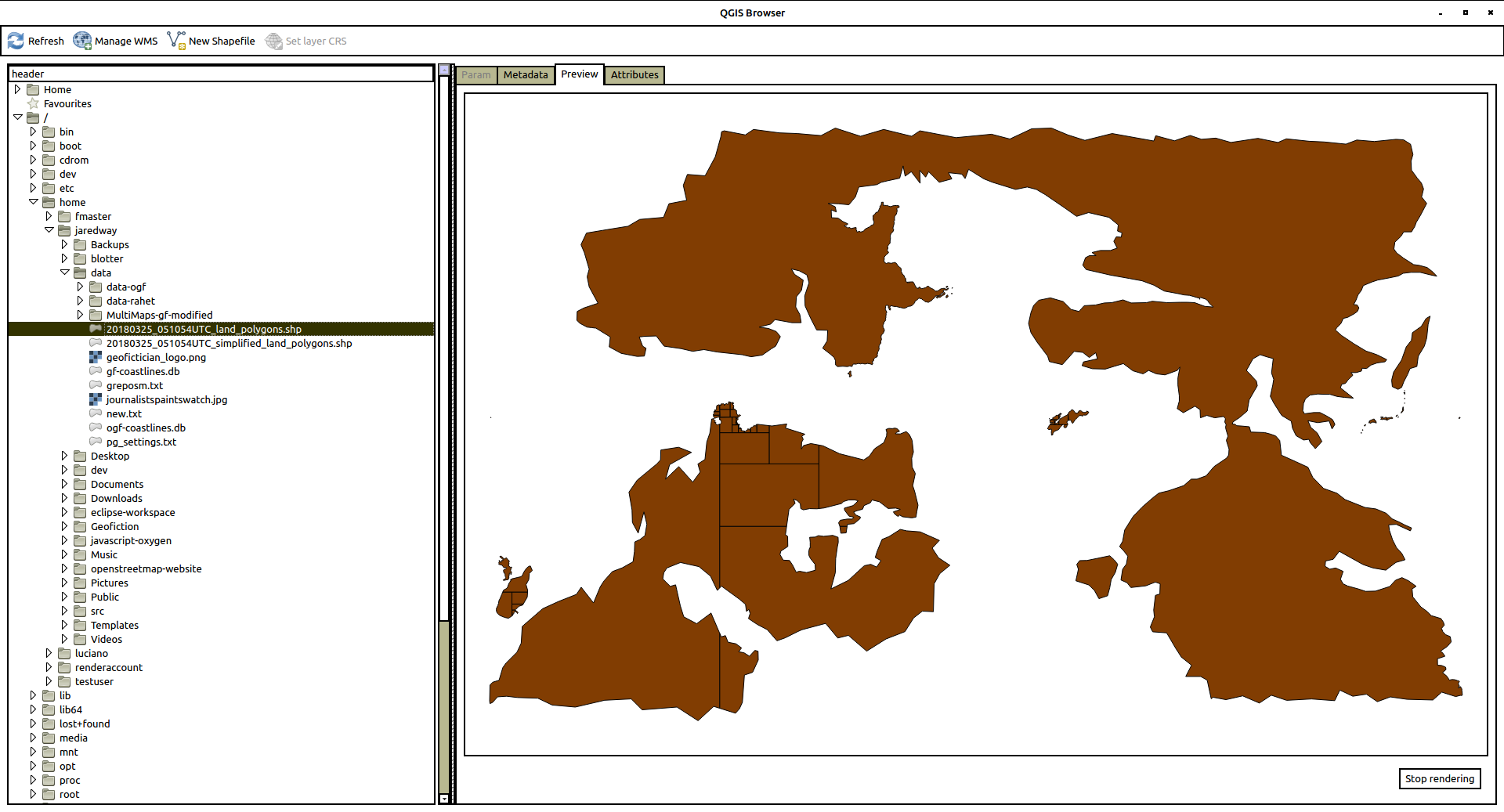 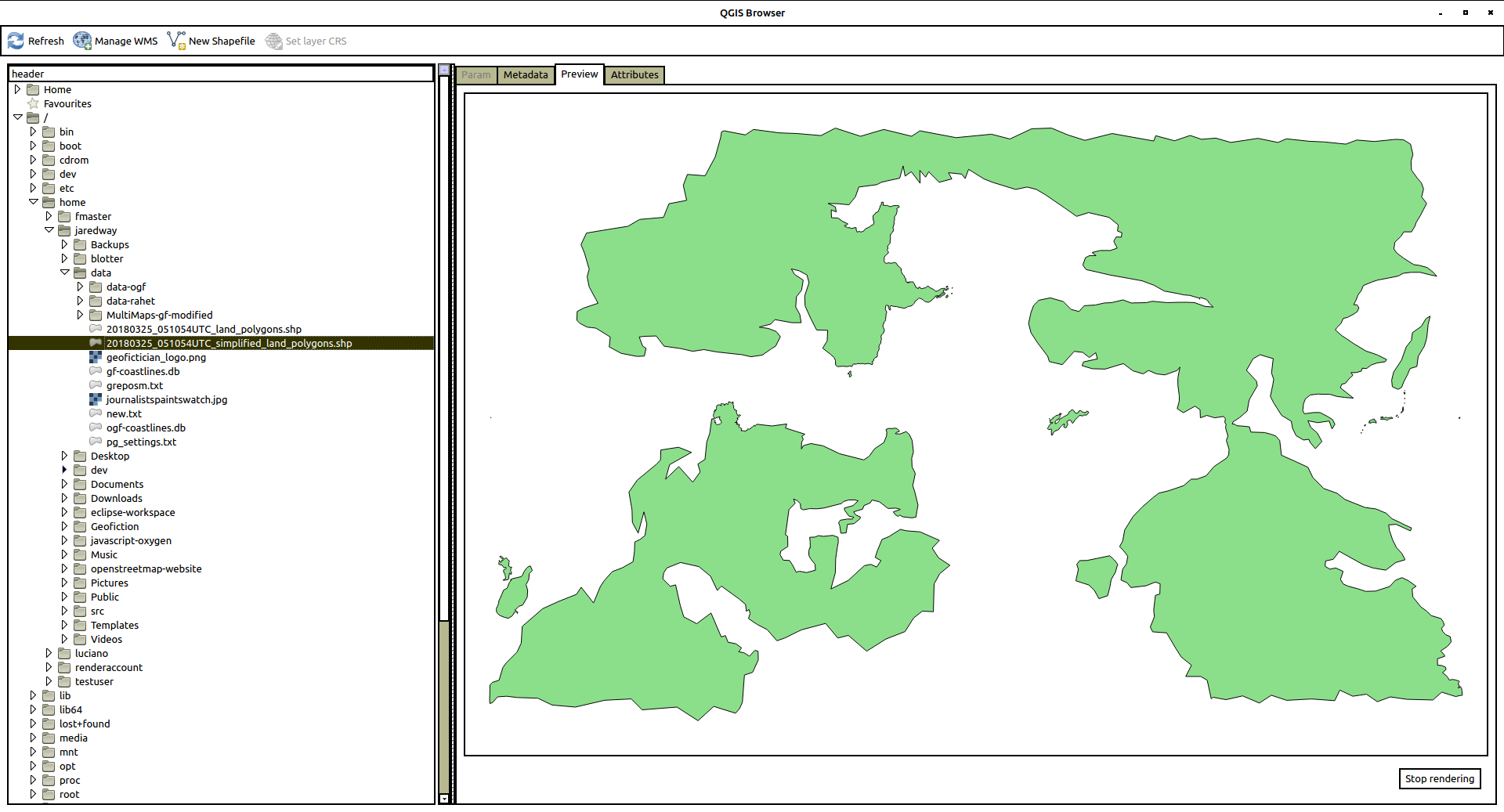 And these, copied to the appropriate osm-carto data directory locations, gives me the beautiful render you see now. [EDIT: Note that the view below of the Rahet planet is “live”, and therefore doesn’t match what shows in the screenshots above. I have moved in a different concept with my planet, and thus I have erased most of the continents and added different ones, and the planet is now called Arhet.]

I actually suspect this way that I did it is not the completely “right” way to do things. My main objective was to give the osm-carto shapefiles it would find satisfactory – it was not to try to reverse-engineer the actual OSM or OGF “coastline” processes.

There may be something kludgey about using the output of the second coastline run in the above two instances as the “simplified” shapefile, and this kludge might break if the Rahet or OGF planet coastlines were more complex, as they are for “Real Earth.” But I’ll save that problem for a future day.

A more immediate shapefile-based project would be to build north and south pole icecaps for Rahet, in parallel with the “Real Earth” Antarctic icesheets that I disabled for the current set-up. You can see where the icecaps belong – they are both sea-basins for the planet Rahet, but they are filled with glacial ice, cf. Antarctica’s probably below-sea-level central basin. And the planet Mahhal (my other planet) will require immense ice caps on both poles, down to about 45° latitude, since the planet is much colder than Earth or Rahet (tropical Mahhal has a climate similar to Alaska or Norway).